The road up and the road down are the same thing.

The Marriage of Opposites, or Chemical Wedding, or Coniunctio Oppositorum, is a term from alchemy that means combining two opposite substances, or essences, or even ideas into a unity greater than the sum of its parts. This term has also meaning in Jungian psychology as Jung showed many parallels between the processes of self-understanding and alchemy. For example, the marriage of opposites is symbolized by the union of the Animus and Anima.

Opposites are everywhere in our everyday lives and language. They are also prevalent in our social institutions such as religion, politics, philosophy, and science. There are long lists of opposites of life and language and institutions: spatial, temporal, relative, linguistic, mathematical, social, normative, philosophical, and mythological.

Usually the casual causal combination of opposites leads to an averaging of the two. For example if hot and cold liquids are combined, soon you will just get a tepid mixture. This is entropy, where the difference between the hot and the cold material is soon eliminated by the blending of the parts, and in this case actually fueled by the energy of the hot molecules.

The usual meaning of this Chemical Wedding is rather esoteric or mysterious. I propose that what the term “marriage of opposites” really means is quite different. Each “opposite” is an opposing pair itself, so that the marriage is between two pairs instead of two things. Instead of a unity, I suggest that this is the root of multiplicity. Instead of simplicity, there obtains organized complexity. Two pairs of two things yields four things in many ways: 2 + 2 = 2 * 2 = 2 ^ 2 = 4.

Let A and A’ be a pair of opposites, as well as B and B’. Then we can consider a union between those pairs to be:

Our individual genetic material is really a marriage of opposites in that half of it comes from each of our parents. Like Mendel’s peas, the sexual union generates the possibility of four versions of each feature. Similarly, the combination between two pairs of opposites generates a fourfold of possibilities.

How should one arrange such a union on a diagram? In Aristotle’s Square of Opposition, the true opposites are at opposite corners of a square, the “contradictories” (one is true and one is false). There are also “contraries” (cannot both be true), “subcontraries” (cannot both be false) and “subaltern” (only one implies the other) relations between corners. But the square is built from the logic of quantifiers and properties, different from this fourfold.

They can be arranged as the cycle AB + AB’ + A’B’ + A’B: One can naturally consider AB and A’B’ to be opposites, as well as AB’ and A’B. One can start with the two opposite pairs crossed, and this cycle sequence arises simply between them. Also, one nice feature is that only one of A or B needs to be changed to its opposite as we move around the cycle, even as we return to the beginning of the sequence. This is called a “gray code” in terms of binary numerals. 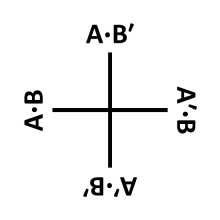 They can be arranged as the grid AB + AB’+ A’B + A’B’: Here the opposites fall across a diagonal that runs southwest to northeast. This doesn’t have the nice properties of the cycle above, but I have used it for many of my diagrams. Instead of a cyclic symmetry, we have a dynamic symmetry about this diagonal that runs from an imagined origin of separation towards greater mixing and combination. This is the usual binary numerical sequence. 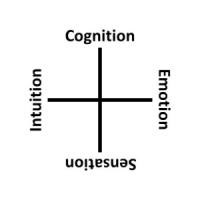